Call Guinness, we are attention-seeking freaks! 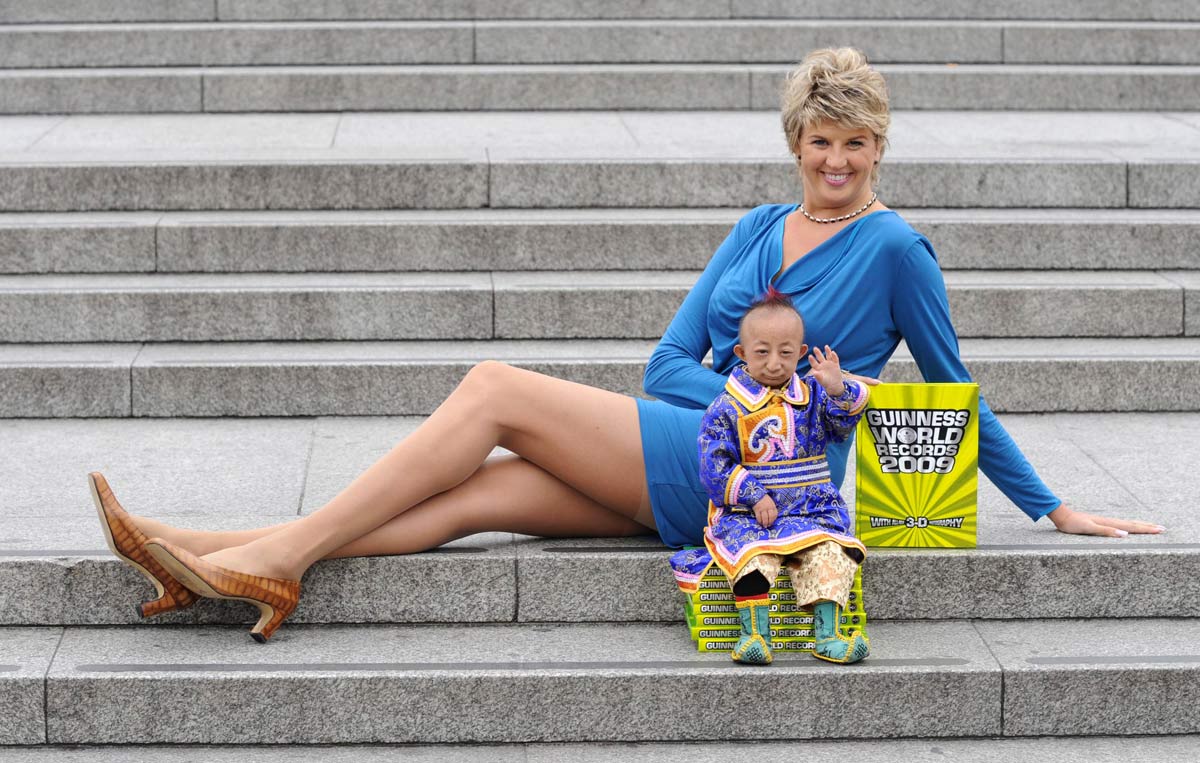 After a recent stumble into this rather cute photo of Pingping and Svetlana Pankratova, the world’s shortest man and leggiest woman respectively, it made me think back to my childhood fond memories of Guinness world records.

Those amazing facts and discoveries that warmed our hearts and made us smile.

You remember Robert Wadlow – the tallest man in the world (268 cm)? Or the beautiful SR-71 “Blackbird” world’s fastest jet aircraft (reaching Mach 3), or even the Petal – the world’s smallest camera (circa 1974). Of course there were also those usual oddities of eye popping faces, and hair-covered women etc, but they seemed too odd and isolated to effect us really. So in general, life seemed… how should I say.. in balance. So it made me wonder, which are the record breakers of today?

I got curious and took a peak in the Guinness World Records website, to search for some recent records. After 5 minutes I started shaking my head with disappointment. 10 minutes later I started feeling a little sick and wanted to throw up! Ok, that was enough.

So here are some of the highlights: Ken Edwards of London has the world record for Most Cockroaches eaten (36 of them) – lovely. Jackie Bibby of New York holds the record for Most Live Rattlesnakes Held in the Mouth (10 snakes) – yikes! The American series “Lost” is the most downloaded TV-show (over 5 million downloads for one single episode – don’t ask me which one), and NIVEA having it’s largest body cream container (measuring 2 m in diameter, 53 cm high, holding 1,124,490 ml of creme) – actually for a Body lotion it kinda makes sense.. no? And the list goes on to a bottom sinking record going under the name “The Guinness Community” which basically shows web movies of odd members attempting to break records such as: 100 clothes peg on the face and 266 straws in the mouth… Belgians. So, what seemed to be in the past a name that was mostly associated with amazing discoveries and unbelievable accomplishments that made our world seem slightly more interesting and unexplainable, slowly and gradually transformed into a house hold to decadent commercial PR stunts and attention seeking freaks that will go through any pain or danger to their digestion with no sense of shame or humility, just to have Guinness at their door and camera crew shoved in their face. And suddenly these cases don’t seem so isolated anymore – they are much closer and familiar part of our daily life. Talk about a mirror to our society, but this is ridiculous! Makes me ever so slightly feel our world is going to shit!

But then comes along a glimpse of light shining some hope in the end of the dark Guinness tunnel, in the form of Michel Lotito (aka Monsieur Mangetout) of Grenoble, France, who holds the record for world’s Strangest Diet. Evidently he has been eating metal and glass since 1959!  900 grams of metal per day to be exact. God bless him! I wonder if there is a world record set for a person sitting the longest on a chair doing absolutely nothing. I wouldn’t be so surprised.